The History of Smithfield and the Market Buildings

SmoothField and the legacy of trade

With a rich history of trading, Smithfield has been an important site in London for nearly a millennium.

As a grassy expanse of land stretching to the River Fleet, ‘Smithfield’ as we know it was once referred to as “SmoothField” meaning smooth plain. Its convenient access to water and land for grazing as well as a location on the edge of the historic City walls meant the area became the site of London’s livestock markets from as early as the 12th Century.

The popularity of Smithfield began to grow in the 14th Century when the slaughter of livestock was banned within the City walls and the Corporation of London granted formal permission to hold a weekly livestock market.

During this period “SmoothField” also became a place of spectacle and debauchery. From 1113 to 1855 it was the home of the infamously disorderly Bartholomew Fair, a two-week celebration of the end of summer each August. Smithfield also regularly hosted medieval tournaments and was a site of execution for criminals including William Wallace.

In 1614 the open space at the centre of Smithfield was paved and a drainage system was installed for the first time. Today some of the local street names still remember the history of the historic market including Cock Lane, where poultry was sold, Cow Cross Street, where livestock was traded, and Cloth Fair, home to the rag trade.

By the mid-18th century there was growing concern about the presence of a livestock market in the centre of the city and in 1852 the livestock market was relocated to Copenhagen Fields in Islington.

Smithfield has always been a place to trade and where food has brought people together, and we think this legacy should be reflected in any future changes to the buildings. 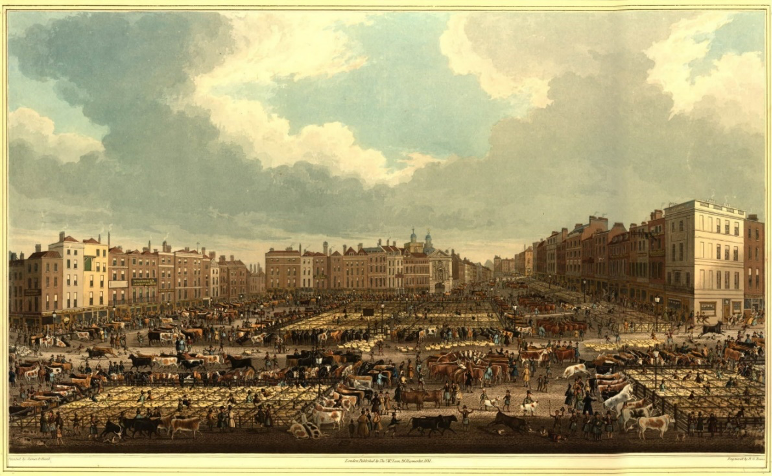 Drawing of Smithfield Livestock market in 1830 before the Victorian market was built. 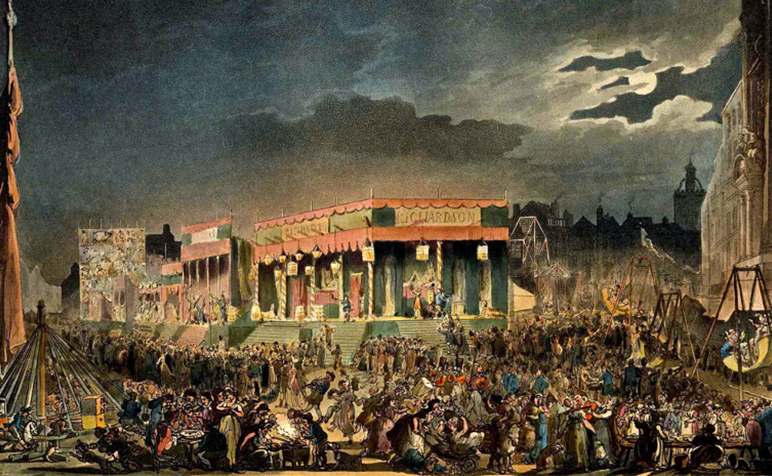 Drawing of Bartholomew Fair before it was abolished in 1855.

The Central Meat Market which is still standing today was built in the 1860s by the Corporation of London and designed by the City Surveyor Sir Horace Jones. The market cost £200,000 to build, was designed to feed 3,000,000 people, and was opened to the public with a big banquet in the Grand Avenue in 1868.

Designed to be ‘state of the art’ wholesale markets, Sir Horace Jones was tasked with creating a self-contained city for the meat traders. The market buildings reflected the modern Victorian city and were impressive in their ambition and scale.

The buildings had to allow salesmen and buyers to carry out their business efficiently with well-designed spaces for displaying the meat. It was also important that the design of the building allowed for good air circulation to keep the meat cool and fresh.

The market buildings include four market halls which are divided north to south by the ‘Grand Avenue’ and east to west by ‘Buyers Walk’. A turret marks each of the four corners of the building. The turrets that look onto Lindsay Street and East Poultry Avenue used to be home to a refectory, public houses, and smoking room.

South of the halls is the walled Rotunda covered by the Rotunda gardens. A cobbled ramp between the walls leads to the basement below. The Rotunda was an epic piece of engineering for its time. 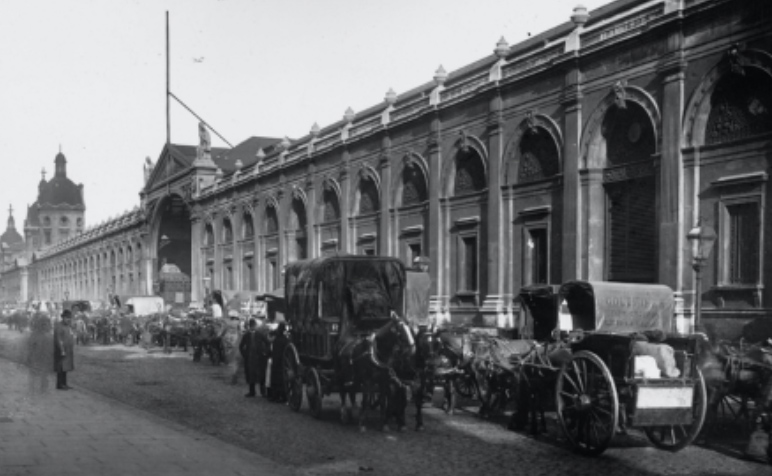 Photograph taken in 1888 of the Victorian building including th entrance to the Grand Avenue with one of the carcass corridors in the foreground. 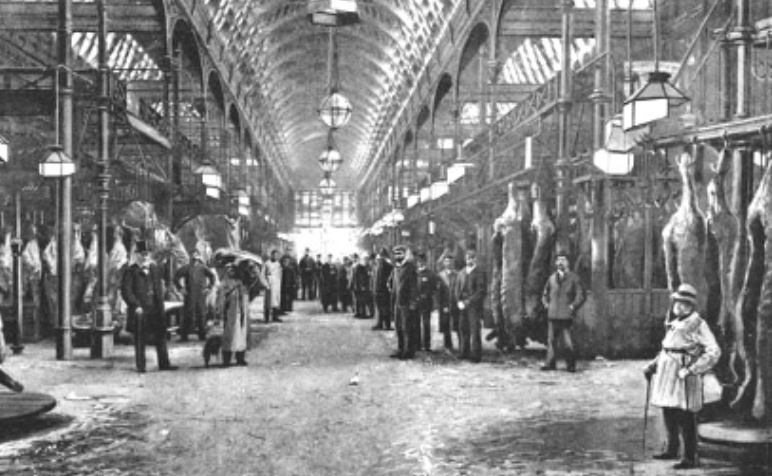 Photograph of trading the meat. Note the enormous volume produced by the over-sailing roof.

One of the most ambitious aspects of the Victorian market remained hidden the beneath the ground.

For the first time ever, meat was delivered by underground railway tracks beneath the building directly to the market. The railway was at the heart of the market’s design and the entire basement was a station that trains from across the country passed through. The basement was separately managed from the meat market above as a goods depot. The rotunda ramp was used to move deliveries from the basement up to the market. By 1854 up to two-thirds of meat at Smithfield was delivered by train.

Following the decline of railway goods services, part of the basement was converted into a car park in the 1960s but trainlines – the new Elizabeth Line and rail sidings, still pass through parts of the basement. 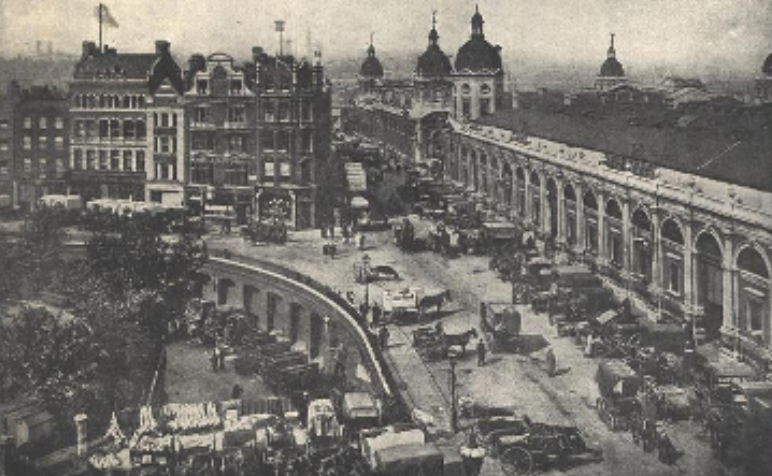 Wares leaving the goodsyard by horse and carriage using the ramp up the Rotunda. 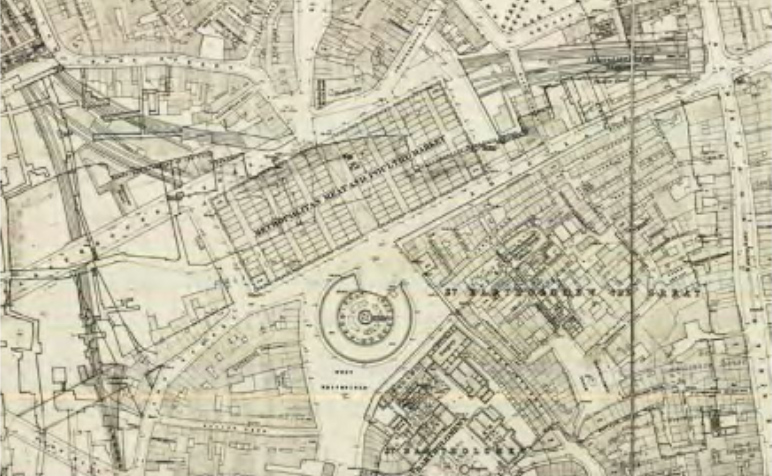 1875 OS map of Smithfield including the railway sidings passing underneath the building.

Inevitably, the Victorian market buildings have been adapted and added to over time.

In the 1990s the Smithfield East and West Market buildings were extensively refurbished to comply with higher meat trading regulations. During this period some of the original architectural elements of the of the buildings were altered with new additions added such as the canopy, truck docks for goods vehicles, forklift bays, office entrances and fire escape doors. The roofs were also altered to include more windows for the attic spaces.

It is widely acknowledged that the additions and alterations made over the past 100 years detract from the beauty and elegance of the original buildings, something this project seeks to address.

Photograph of the current building including the glass canopy installed in the 1990s together with HGV loading docks.