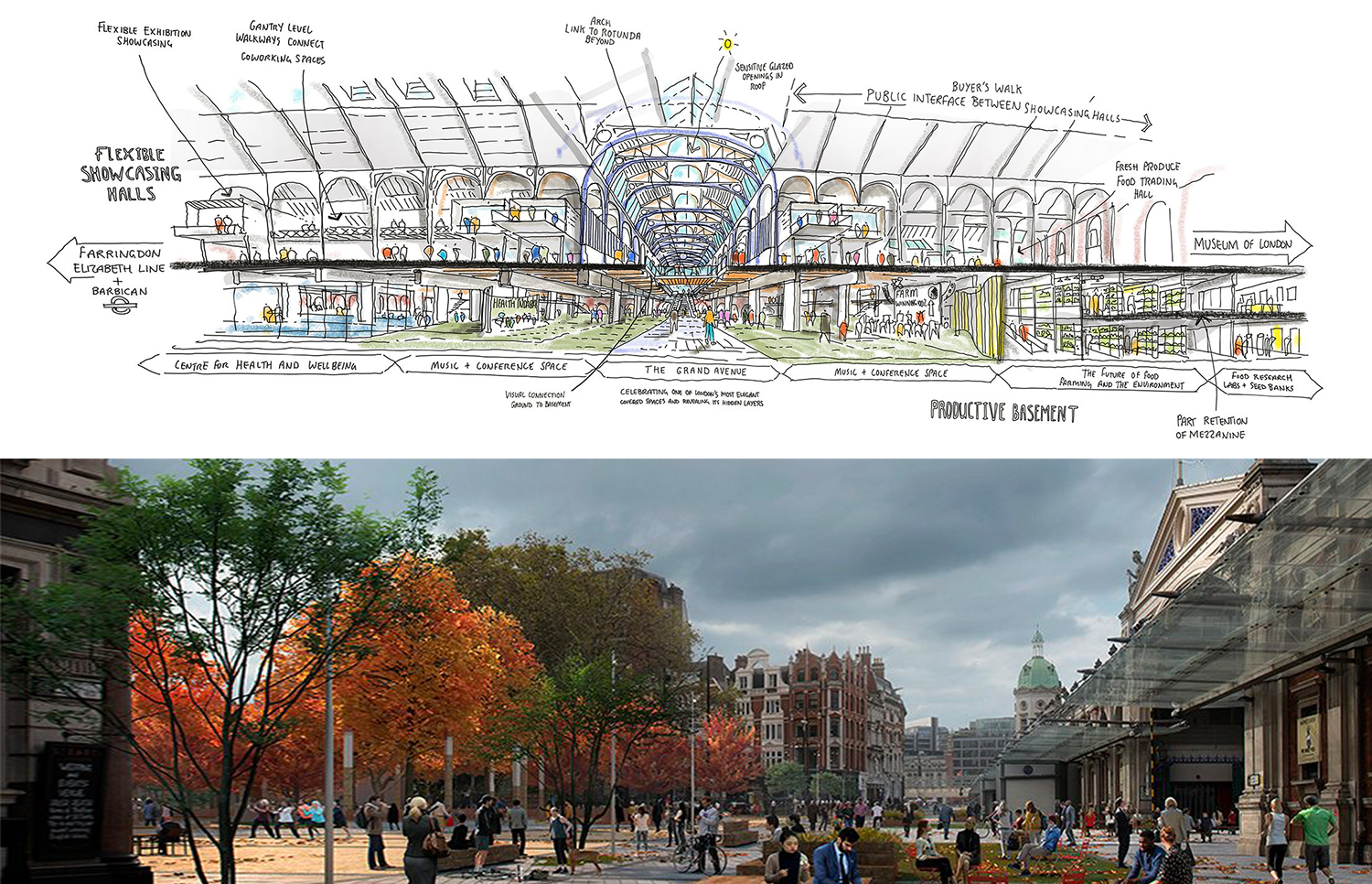 The City of London Corporation has today announced the winning teams who will be reimagining the Smithfield East and West Market buildings and the broader Smithfield public realm – Studio Egret West and Hawkins\Brown, respectively.

The projects will help realise the City Corporation’s vision for Culture Mile which stretches from Farringdon to Moorgate. Culture Mile is led by the City of London Corporation, together with the Barbican, Guildhall School of Music & Drama, London Symphony Orchestra, the Museum of London and a growing network of stakeholders from across the commercial, cultural and civic sectors.

Together the partners are leading the transformation of the area, improving their offer to audiences with imaginative collaborations, outdoor programming and events seven days a week. Once the new Elizabeth Line stations open at Farringdon and Moorgate by 2021, many thousands more visitors are expected to come to the City. The new Museum of London is set to open in 2024 with plans for the Centre for Music also being considered.

Smithfield East and West buildings and the Rotunda

The City Corporation is planning to consolidate its three wholesale food markets onto a single site at Dagenham Dock, in the London Borough of Barking and Dagenham. Should the Meat Market move as part of this project, the Smithfield East and West Market buildings will be transformed into a vibrant, mixed-use development that complements Culture Mile. The final concept designs will protect and reflect the history of these iconic buildings which have served their area for over 150 years.

The City Corporation appointed a diverse judging panel, which included a number of internal and external members and an independent Mayoral Design Advocate. After a robust evaluation process, Studio Egret West (SEW) was selected as best placed to lead on the designs for this landmark project given their comprehensive knowledge of the area and their exciting ideas for breathing new life into these special buildings. SEW will be supported by a cast of experts including Alan Baxter Associates, structural engineers and heritage advisors, Donald Insall Associates, conservation architects and This Must Be The Place, meanwhile use specialists.

SEW’s design submission showed how a loving restoration could see these structures be turned to public use, with sensitive interventions opening-up the buildings allowing new users to better interact with the spaces inside.

SEW adopted a flexible approach to curating a mix of uses that would both support the night-time economy and complement the new Museum of London, recognising the pace of change in the broader area. The uses proposed blend cultural, commercial, and creative space to create a world-class destination for all. SEW’s approach also allows for some early delivery through pop-up and temporary uses that both celebrate the history of the location and introduce exciting innovative uses.

“We are excited to explore the evolution of Smithfield Market, working closely with the City of London Corporation, key stakeholders and the wider community.

Thanks to connectivities that did not exist previously, Smithfield is set to attract a new influx of people and, should the meat market move, Smithfield Market could be transformed in a highly flexible and imaginative way, creating a place for meeting and making, growing and exchanging, exposition and entertainment.

Similar to the Great Exhibition of 1851, imagine the spectrum of innovations celebrated in the newly opened-up market halls of Smithfield.”

This project will deliver exceptional new public spaces across the whole Smithfield area which runs from Farringdon Street to Aldersgate. The new public realm will transform the pedestrian experience by replacing some of the existing road network with new footpaths and landscaping – creating healthier, well-lit and safer streets, while helping to improve air quality by reducing emissions from traffic.

Hawkins\Brown’s initial concept demonstrated an appropriate and imaginative design process which responded to the different historic street patterns in the area, taking into consideration surrounding character and uses. The proposals also set up methods for introducing greenery into the area, alongside a healthy streets approach, and designing a spacious and welcoming ‘threshold’ area for the major institutions that will be opening on the site.

The new spaces could also host a range of cultural activities throughout the year, attracting new visitors to the area.

“We are delighted to be appointed on the transformation of this historic landmark site. This is a unique challenge to reimagine the identity of an entire area for the enjoyment of London’s residents and its visitors. Our initial scheme is based on the idea of the field – returning the area’s lanes and rat-runs into a single identifiable place that provides a range of settings for civic activities. The design of public spaces could really blur boundaries between inside and outside and redefine how culture is expressed in the public realm. Our practice has been long-time residents of Farringdon and we look forward to revealing the stories and significance it has had for many in the area.”

“These Smithfield buildings and the wider area are a key part of the Square Mile that will serve as a gateway for even more visitors once the Elizabeth Line opens. We are confident that these two firms and their partners will be able to help bring our vision for these historic buildings to life, while creating exceptional public spaces around them.

“This is a significant step forward in our journey to deliver on our wider ambition to create a vibrant and new world-class Culture Mile at the heart of the historic Square Mile. Alongside the new Museum of London, these plans will create exciting, new creative uses and public spaces, attracting workers, residents and new visitors to the area alike, as well as meeting our obligations to improve air quality.

We look forward to sharing more detail on our plans with stakeholders in the coming months.”

The images released today show initial design concepts from a design competition; Studio Egret West and Hawkins\Brown will now begin working with key stakeholders to develop designs for the Smithfield East and West Market buildings and public realm projects, with engagement on the plans with the local community expected to take place in the coming months.

The City of London Corporation, which owns and manages Smithfield, New Spitalfields and Billingsgate Markets, is the fourth largest funder of heritage and cultural activities in the UK and invests over £100m every year.