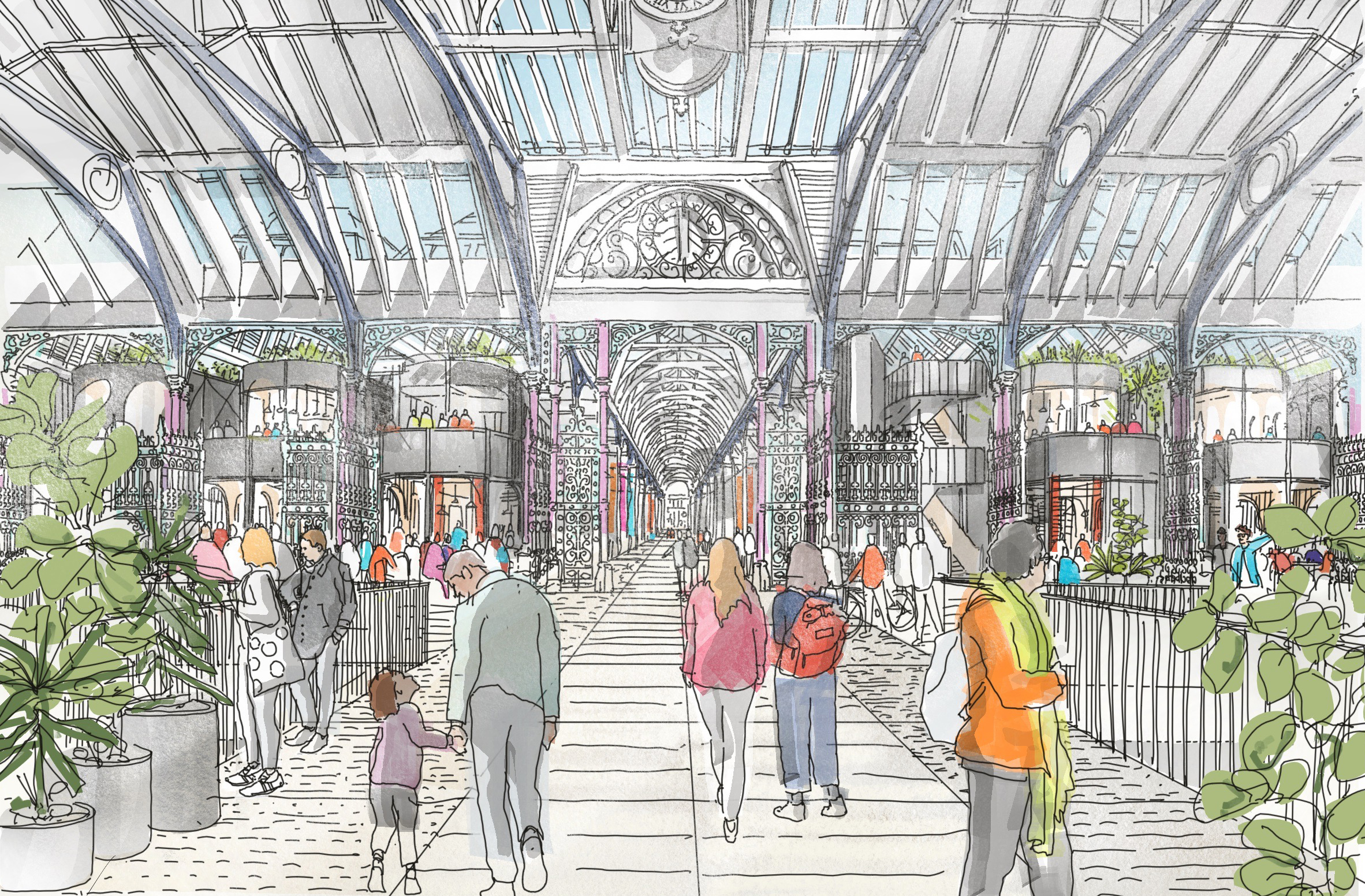 The City of London Corporation has today (31 July) revealed its early ideas to re-imagine the nationally significant landmark and secure the legacy of the Grade II* listed East and West Smithfield buildings and the Grade II Rotunda as the heart of a thriving and inclusive London.

Key place principles and sensitive interventions are proposed to create a destination that could accommodate a myriad of exciting uses should the meat market move. A core theme is sustainable food production, preparation and consumption all under one roof, as well as the creation of flexible halls that could support the creative industries.

The focus of the design concepts has been the East and West Market buildings that are currently home to Smithfield meat market, for which the City Corporation has recently submitted an outline planning application to co-locate alongside Billingsgate and New Spitalfields markets at a site in Dagenham Dock. A Private Bill is also required in order to move all three markets and a further iteration of the Smithfield concept designs will be submitted as part of that process later this year.

Not only will a future Smithfield work in harmony with the new Museum of London to the West of the site, which received planning approval recently, it will crucially form part of the City Corporation’s vision for Culture Mile, stretching from Farringdon to Moorgate.

The initial concept designs, which have been put together by architecture practice Studio Egret West, show how a loving restoration of the buildings could see them transformed for public and commercial use, with sensitive interventions opening-up the buildings to allow local communities, new workers, and visitors alike to better interact with and enjoy the rich layers of history and intriguing spaces inside.

The early concept designs propose removing some of the more modern additions to the market buildings, including the loading bays, canopy, and cold rooms to reveal the wonderful, elegant Victorian structure. This would create four large, clear areas under the oversailing roof that would be highly adaptable for a wide range of future uses, allowing the building to quickly and flexibility respond to future demand and ways of working, as well as accommodate the anticipated increased footfall in the area as a result of the Elizabeth line.

One of the newly exposed four halls could even house a sound-proofed multi-media entertainment space for local performances and cultural acts throughout the year, alongside independent food and drink kiosks – offering spaces for local start-ups and micro industries to develop and grow.

Flanking the Grand Avenue, new freestanding units could host a number of education and training programmes throughout the year, offering opportunities for Londoners of all ages to explore careers in the food industry. This focus would allow Smithfield to be at the forefront of food innovation in the capital – which could play a vital role in exploring new food technologies and more sustainable methods of food production. This approach would ensure that the legacy of Smithfield as a food destination will live on for generations to come.

Strikingly, the early ideas would also see part of the floor of the Grand Avenue removed to connect the building above with the basement levels below, revealing these spaces to the general public for the first time in their history. This would create a wonderful sequence of spaces for all to enjoy as you descend down to a new “Lower Grand Avenue”, through the cavernous basement spaces, and out through the unparalleled Rotunda, which could in itself be an all-seasons garden experience.

The City Corporation is now seeking feedback on its initial concept designs for the site as it continues to bring forward more detailed plans.

“These imaginative early designs showcase how the Smithfield East and West Market buildings and Rotunda could be carefully transformed into an exciting destination that reflects their traditional role in the capital’s food chain while also opening up new cultural and entertainment spaces for public use.

“These plans are a key part of our wider ambition to create a vibrant and new world-class Culture Mile at the heart of the historic Square Mile.

“Alongside the new Museum of London, they will help to attract workers, residents and new visitors to the area, as well as meeting our obligations to improve air quality.”

“This truly is a once-in-a-lifetime opportunity to set the direction for the restoration of these much-loved structures, and we believe the principles and interventions we are presenting will deliver the right balance of ambition, opportunity and flexibility for this next chapter in Smithfield’s history.”

The images released today show the initial concept designs on how the Smithfield East and West Market buildings and Rotunda could look and what they could be used for in the future should the meat market move. They have been designed by Studio Egret West, who were appointed as the lead architects for this project in January of this year by the City Corporation. SEW are supported by Alan Baxter Associates, Donald Insall Associates, Max Fordham, Greengage, Spiers and Major, PT Projects, Deloitte, Iceni, and This Must Be The Place.

Members of the public will be able to share their feedback on these initial concepts via the website, www.wholesalemarkets.co.uk/smithfield until Friday 4 September 2020.

The City of London Corporation, which owns and manages Smithfield, New Spitalfields and Billingsgate Wholesale Food Markets, is the fourth largest funder of heritage and cultural activities in the UK and invests over £100m every year.

We use cookies on our website to give you the most relevant experience by remembering your preferences and repeat visits. By clicking “Accept”, you consent to the use of ALL the cookies.
Cookie settingsACCEPT
Manage consent

This website uses cookies to improve your experience while you navigate through the website. Out of these, the cookies that are categorized as necessary are stored on your browser as they are essential for the working of basic functionalities of the website. We also use third-party cookies that help us analyze and understand how you use this website. These cookies will be stored in your browser only with your consent. You also have the option to opt-out of these cookies. But opting out of some of these cookies may affect your browsing experience.
Necessary Always Enabled
Necessary cookies are absolutely essential for the website to function properly. This category only includes cookies that ensures basic functionalities and security features of the website. These cookies do not store any personal information.
Non-necessary
Any cookies that may not be particularly necessary for the website to function and is used specifically to collect user personal data via analytics, ads, other embedded contents are termed as non-necessary cookies. It is mandatory to procure user consent prior to running these cookies on your website.
SAVE & ACCEPT
Skip to content