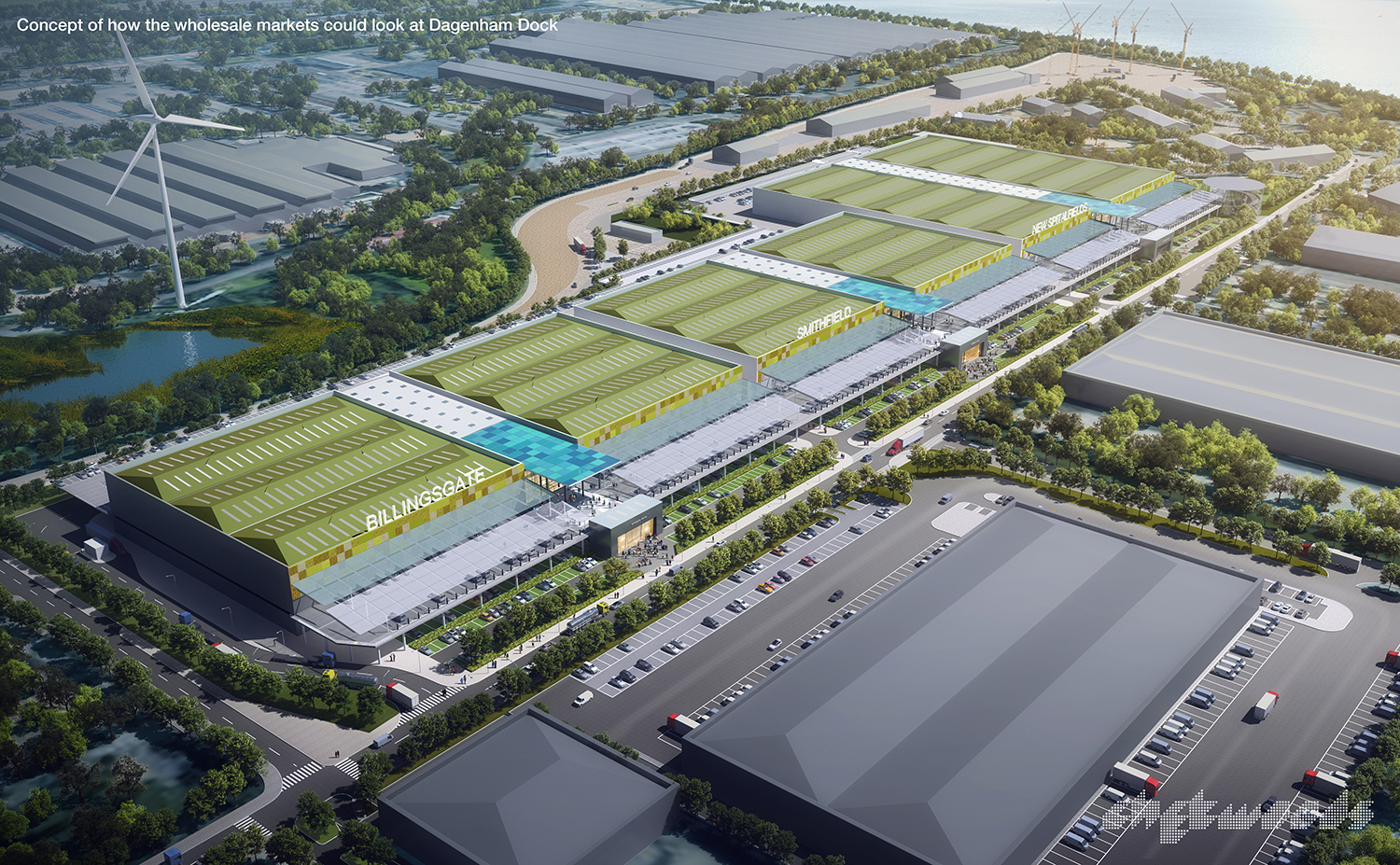 The City of London Corporation tonight (22 March) took a major step forward with its plans to co-locate its three historic food markets of Smithfield, Billingsgate and New Spitalfields to a purpose-built site at Dagenham Dock, by securing a resolution to grant outline planning consent from the London Borough of Barking and Dagenham.

The plans will bring together the three historic markets for the first time. It will help to secure their futures and support the success of the UK food industry for generations to come – creating one of the UK and Europe’s biggest wholesale food market destinations.

It is predicted that the co-located market, first announced in 2019, could generate expenditure totaling c.£2.9bn across the UK economy each year. This would offer a significant boost to the food industry at a time when it faces unprecedented uncertainty from the UK’s exit from the European Union and Covid-19.

Of this £2.9bn, £1.4bn would be generated by the markets themselves, with the rest generated across a UK-wide supply chain, helping to support some 11,800 jobs in the process. This means that for every pound spent at the markets there would be an extra pound spent across the UK supply chain. The majority of this expenditure will go towards the food industry, helping to support every part of the sector, from farming to dining.

“At a time when the wholesale food sector has been severely impacted by the pandemic, this outline planning approval will provide a welcome boost for the capital and the wider UK supply chain.

“This is a once-in-a-generation opportunity to create one of Europe’s biggest wholesale market destinations, delivering thousands of new jobs and worth billions of pounds to the UK economy. We are excited to be building it in the London Borough of Barking and Dagenham, an area with huge potential, and to be part of the regeneration there.

“We are confident that these plans will give our markets and traders the modern facilities they need to thrive and grow, delivering significant benefits for future generations.”

The move will generate £310m of Gross Value Added (GVA) for the local economy in Barking & Dagenham, offering significant boost to what is one of just two London boroughs identified by the Government as in need of additional funding through its ‘Levelling Up Fund’.

Barking & Dagenham and surrounding areas will also benefit from support for up to 3,500 jobs, both those directly at the markets or in local supply chains, and through the creation of a new food school and food education programmes that will provide space to train the next generation of butchers, fishmongers and fruiterers.

The City of London Corporation’s three wholesale food markets at Billingsgate, New Spitalfields and Smithfield have been at the heart of the UK food industry for centuries but they now face a series of pressing challenges, not least because the current facilities and trading environments are outdated and unsustainable.

The plans for Dagenham Dock will create a 21st century food location and provide market tenants with modern facilities that will help them adapt to modern standards and in a location that offers room for them to efficiently accommodate and manage their businesses and continue to grow.

In order to improve both the efficiency of the markets and reduce its environmental impact, the City Corporation is exploring opportunities to use the River Thames for transporting produce. London has a long history of river freight and the successful Thames Freeport, including Dagenham Dock, is a step forward towards re-introducing this mode of transport and further reduce the number of market vehicles on the road, reducing carbon emissions and pollution as a result.

“Cllr Darren Rodwell, Leader of Barking and Dagenham Council, said: “This is yet more great news for the borough. The move will bring jobs as well as new training opportunities as part of our plans to establish a food school locally. Along with the plans we announced last week for a second film studio, confirming our status as London’s Hollywood, this confirms our commitment to securing the recovery in the local economy.

“I am particularly pleased with the intention to use the River Thames to move freight to and from the markets. Together with the Thames freeport, this will help reduce the capital’s carbon footprint at the same time as promoting green, sustainable jobs.”

The image released today – developed by architects Chetwoods – shows how the new markets could look, which is anticipated to open by 2027 at the earliest. A Private Bill is required in order to move all three markets to Dagenham Dock, which is due to be submitted to Parliament later this year.

The move will also release all three existing market sites for redevelopment, offering the opportunity to create new homes, offices, retail and cultural spaces, that are now needed across the Capital. The City Corporation has already unveiled initial plans for the future of Smithfield Market as part of their wider vision for the Culture Mile – a new cultural and creative offer at the heart of London.

You can visit www.wholesalemarkets.co.uk to find out more about the plans.